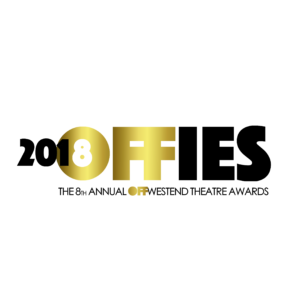 Off West End exists to celebrate the full spectrum of Off West End theatres and to draw increasing numbers of the general public into the excitement of these little powerhouses.  The Off West End Theatre Awards (The Offies) celebrate the best of each year’s productions, performances and creatives.

In 2017, Offies assessors saw over 320 shows at around 80 venues across London, and put forward over 350 nominations from around 190 of these shows, covering around 60 venues.  The Offies Panel (of “super assessors” and London theatre critics) have whittled these nominations down to the best three or four across 29 categories.  Over 80 finalists have been selected, representing shows at over 30 Off West End venues. A full list of Finalists is available here.  The winners are selected by the Offies Panel and will be announced at an Awards ceremony.

Theatres of all shapes and sizes were among the finalists from The Arcola in the north, snugly reclaiming an old paint factory, to the recently renovated White Bear Theatre inside a pub in the south; from the historically grand yet diverse Theatre Royal Stratford in the east to the established high-flyer, The Finborough, in the west – all had work shortlisted for these uniquely coveted awards, the only awards to reward independent theatres and their extraordinary achievements outside the mainstream.

This year, The Offies are celebrating our 8th year of awards, and we’re bringing back the live ceremony! We are thrilled to announce that The Offies 2018 will held on Sunday 4th March at The Albany, Deptford – with the red carpet champagne reception starting at 6pm for a 7pm ceremony.

The Albany is a performing arts centre with a history stretching back to the nineteenth century. The Albany is a new type of arts venue, very much driven by the cultural diversity and the creative mix of South East London. During the last year over 180,000 people visited the Albany, including audiences of over 40,000 for more than 400 events. The Albany has four performance spaces, and their programme encompasses a range of music, theatre and spoken word, as well as an array of participatory projects.

The Offies 2018 will be broadcast live on digital television for the first time ever, with our media partners London Live.  Alongside London.Live, we will also broadcast via Facebook Live from The Albany and, as usual, our announcements on Twitter shared by glamorous hordes of theatre-goers, actors, writers, directors, producers, technicians and creatives and their millions of followers.

In addition, as part of our 8th birthday celebration, over the next 8 weeks we will be exploring on our social media channels the 8 reasons why The Offies & Off West End Theatre continue to thrill and thrive – encouraging followers to tweet in their own reasons and stories with the hashtag #Offies8

Also in attendance will be some of our industry experts who have lined up again this year to be ‘Patron Saints’ to the winners in 18 categories so that the awards mean more the morning after than just a head full of bubbly. These awards really make a difference by offering the winners an introduction to an industry expert who takes them under their wing for a year to offer specialist advice, useful introductions and guidance in their career.

We are also pleased to confirm our major sponsors this year: Theatre.London, White Light Ltd, Oberon Books, MADE (travel & tourism), AKA (public relations) and Equity.

Exclusive tickets are also available to the public to buy for this year’s event – there is an Early Bird offer of £30 available to 11 February.  After that date, the standard price of these tickets is £42.  Click the event in the box at left (above twitter feed) to make a booking.

The ticket includes a glass of bubbly on arrival and nibbles and canapes at the party after the event – there will also be two paybars at the venue.  The main venue will be laid out in cabaret style, with a section reserved for finalists – other seating will be available on a “first come first served” basis.

Offies finalists and OWE venues and others working in the OffWestEnd theatre sector are eligible for free or discounted tickets for which a discount code is needed – to get your discount code, please email geoffrey@euclid.info, explaining the reason for your request.

OffWestEnd covers independent, fringe and alternative theatres in London, and Euclid is now providing the management of OffWestEnd support and services, including the Offies awards.

Geoffrey Brown, Director of Euclid, is the UK's leading expert on EU funding - Euclid was the UK Cultural Contact Point (CCP) for 11 years and was the lead partner in a successful Grundtvig application. Geoffrey has run over 150 CulturEuro seminars in the UK and across Europe, has prepared regular advice & guidance notes, and undertaken several research reports on EU funding. Geoffrey offers services to EU Culture programme applicants and projects - he can advise on your application and, for successful applicants, offer help to get your project started or to help you produce your final report. More information can be found on the Funding section of this website (select under Services in the top menu above).

If you would like assistance with your EU funding application or EU funded project, email Geoffrey at geoffrey@euclid.info.

Euclid offers consultancy and advice in addition to its events programme (see above) and online services - Connexus and TICK IT.

Consultancy and advice can be offered in packages ranging from a half-day upwards. Click on Consultancy in the menu header above for more detailed information on these services or send an email to info@euclid.info.